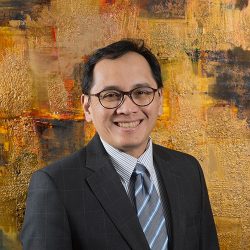 JJ is a leading information and technology law expert in the Philippines. His areas of expertise are in intellectual property, technology law, cybercrime and privacy.

He is the first lawyer member of the Philippine Internet Commerce Society (PICS) and was actively involved in the lobbying efforts for the passage of the eCommerce Act (ECA Republic Act No. 8792). He later drafted its Implementing Rules and Regulations in 2000, under the supervision and control of an inter-agency task force committee co-chaired by the Department of Trade and Industry, Department of Budget and Management and the Bangko Sentral ng Pilipinas. A year later, he co-drafted the Rules on Electronic Evidence as part of the Supreme Court’s eCommerce Sub-committee.

JJ graduated with a Dean’s Medal at the UP College of Law, where he is now an Associate Professor. He is also an alumnus of the Harvard Law School where he obtained his Degree in Masters of Law LLM. He has been continuously practicing law since 1994 and established the Disini &amp;amp; Disini Law Office in 2000, where he is currently
the Managing Partner.

JJ is a frequent speaker in legal forums and news and current affairs programs on television, where he discusses issues involving e-commerce, cybercrime, data privacy, and intellectual property, among others. In partnership with a recognized provider of custom-made human resource management systems, he developed an electronic training and certification course on Data Privacy, and a Philippine Data privacy resource website, both of which are already accessible online.