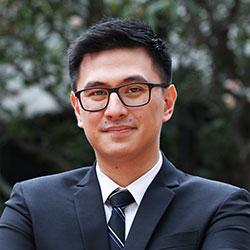 He received his Juris Doctor degree from the University of the Philippines College of Law in 2009 and was admitted to the Philippine Bar in 2010. In 2013, he obtained his Master of Laws from HarvardLaw School where he took subjects on, among others, mergers and acquisition, information privacy, and
corporate and capital markets law and policy. In 2014, he was admitted to the New York State Bar.

He is a member of the academe having taught various subjects in the University of the Philippines College of Law since 2013.

He has wide experience and expertise in legislation serving as advisor for both Senator Edgardo J. Angara and Senator Juan Edgardo Angara in the formulation and implementation of their respective legislative agenda, including the bill that eventually became the Data Privacy Act of 2012.

He is also a member of the International Association of Privacy Professionals.